(ENG) Chapter 1: Preoccupations of the author

From Viaje maravilloso del señor Nic-Nac al planeta Marte by Eduardo Ladislao Holmberg
Translated from Spanish by Ana Lucía Alonso and sam smiley
This was published in Argentina, in serial form in the Buenos Aires Newpaper El Nacional beginning in November of 1875. We will release it chapter by chapter on this blog, and eventually on PDF. Rachel Haywood Ferrera provides some excellent background on this story in English, in her book The Emergence of Latin American Science Fiction. We are translating right now from an edition offered in Spanish by the Biblioteca National in Buenos Aires. 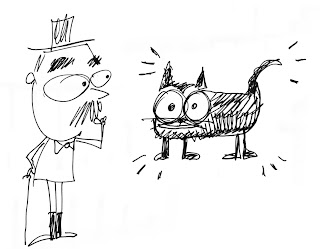 Chapter 1: Preoccupations of the author

Nothing is more admirable than the perfect mechanism of the skies.

Nothing is more pitious than human ignorance. Endowed with weak senses, if  compared to other animals, we claim to have solved the most important questions that can stimulate the spirit in the path of investigation. We can compare ourselves to a traveler who when following a fixed course, suddenly meets a labyrinth of trails: only luck can remove him from a difficult trance; a mariner who in the ocean loses his instruments, leaving his ship to float like a leaf that the wind blows.

So the philosophers, completely lacking in the final elements of the research, concentrate their spirit and appear to explain the phenomena of the universe by any whim of their imagination, as if they were to solve an abstract question, the only case in which such concentration is permitted. The person is not any different who closes and tightens both eyes, seeking to examine a weak organism in a microscope, an instrument which perhaps he didn’t even know by name.

But it is necessary to break with such an old system, to liberate the spirit of material weight, and substantially raise it to those regions that can perhaps serve to resolve the most difficult points of the universe.

A black cat is presented to my eyes and I watch it.

This cat is real under the viewpoint of primary research, but this cat is not substantial, because it lacks many of the essential conditions.

This cat appears virtually; it is neither a reflection nor a shadow, but it is a cat.  I see it, and although I can't feel it, it is possible to assure that its nature is comprehensible.

Who can deny that by virtue of unknown forces, it could be possible to undertake extraordinary travels, as would be in the case of this cat, whose body and spirit being found is perhaps two hundred leagues of distance, comes to impress me with its real image, yes, real, though it is not matter?

This is not, surely, a simple phenomena of the spirit. Simply imitate this cat , and all doubts are vanquished.

The image is not material, all the same, it is perceptible. A mirror reflects a figure, returns it with all its elements... and this image is not a spirit either. Could it perhaps be given the name of spirtual matters?

When the spirit jumps  daringly to interpret certain mysteries, it recedes at the immensity of the attempt with the paucity of the elements that are at its disposal; tied to the dominion of the senses, the senses do not go on beyond its power.

But if the spirit accompanies the image: if the latter conserves the sensory force, free, in turn, of matter, is it not possible to penetrate the world of the unknown and interpret the universe?

Millions and millions of luminaries sparkle in the space. Science baptizes them, calculates their distances, observes their beams, breaks down the elements of their light, numbers them, and archives them in its libraries. And life? Are these perhaps splendid deserts launched in space for man to contemplate?

No, life palpitates in each of those grains of sand in the shining beach of the sky,  and those marvels that the spirit can not understand alone, are going to be resolved by the spirit and the image.

Translater's note: In this chapter, we took the word "materia"  and used the English "matter". We also noticed Holmberg's interest and fascination with the images of Edgar Allen Poe, as signified by the black cat.
Posted by smileypants at 10:01 AM