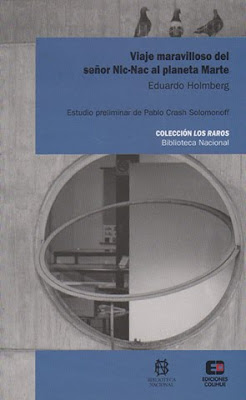 Through attending a reading group last year, i was introduced to the writing of Eduardo Ladislao Holmberg, a botanist and natural historian who worked in the 1800's in Argentina.

The more I found out about him, the more I was interested in what he did, in crossing the borders of science and literature.

I am currently reading "The Marvelous Voyage of Señor Nic Nac and the planet Mars." I have only found this text in Spanish, published by Ediciones Colihue although I was able to buy it on Amazon.

To me it is amazing that this book has not entered the canon of science fiction alongside of Jules Verne, H.G. Wells, and Mary Shelley. Partly it is a language issue, since it hasn't been translated into English. Now however, it is my gain, as I have truly enjoyed the parts I have read. Holmberg wrote the book to popularize science to his fellow Argentinians. It is fairly accessible, and also it is not hard to read for adults who are learning Spanish. It was published in serial form in an Argentian newspaper in 1875.

A short summary of the story. Senor Nic Nac leaves his body with the help of his mysterious friend Seele. He uses astral projection to go to the Planet Mars. Mars seems to have many resemblances to Argentina. That is as far as I am right now but I am finding it a really great read. With the help of friends, I am going to try to publish it in English on this blog.

The book is currently published in a new edition, but in Spanish only. It has great notes by Pablo Crash Solomonoff. Its ISBN is 9505639074. It is published through Ediciones Colihue (2006) in Argentina. It is partly available online through Google Books.
Posted by smileypants at 7:52 AM No comments: